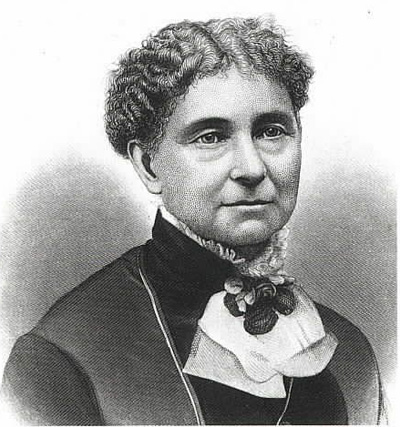 When we talk about “mobility” for women, these days, we’re often speaking metaphorically about social and economic opportunities. But in the late 1800s, the writer Lillias Campbell Davidson dedicated herself to advocating for women to become literally mobile — to travel alone in carriages and in trains; to embark on long walks and climb mountaintops; and especially, to experience the freedom and thrill of riding a bicycle. Davidson started riding in the early 1880s, when she was in her late 20s, and quickly styled herself as an advocate and expert. Women cyclists were viewed as so improper in her neighborhood in the south of England that she rode in the early morning, when the streets were empty; she once turned down a side street to avoid being spied riding by the town vicar. Soon, Davidson was publicly advocating for women to join her, in ladies’ columns for the Scottish Cyclist and the Cyclists’ Touring Club Gazette. In 1892, she founded the Lady Cyclists’ Association, an early cycling organization for women, and served as its president for the next five years. In 1896, she published her collected wisdom in the “Handbook for Lady Cyclists.” “A new world of enjoyment is unlocked to the woman who finds herself a-wheel,” Davidson wrote. Cycling “is a door that leads to many paths of pleasure.” One such pleasure was simply physical. Davidson championed “the feeling of active movement, of the power of free locomotion, the thrill of healthful exertion, and the bounding of the pulses.” But bicycling also allowed middle-class women to escape their homes — “the lives of women have been unnaturally cramped and contracted within doors,” she wrote — and travel to see new countryside sights and tour other towns alone. Cycling also helped radicalize the female wardrobe. The rise of cycling dovetailed with the rational dress movement, and Davidson encouraged women to shed corsets and petticoats in favor of more practical attire. In an 1894 issue of the Cyclists’ Touring Club Gazette, Davidson dismissed the “war against rational dress” as not “very convincing or very full of logic” and quoted one Baltimore woman’s response to those who would shame her for wearing bloomers on her bike: “I can ride faster than people can talk.” As the suffragist Susan B. Anthony told journalist Nellie Bly in 1896: Bicycling “has done more to emancipate women than anything else in the world.” That made the bike a controversial accessory for a lady up until the turn of the century. As late as 1893, as Julie Wosk details in her history “Women and the Machine,” Cycling magazine discouraged women from riding, writing that “for feats of speed and protracted endurance, she is by nature physically unfit, and bound morally, if she respects her sex, to avoid anything in the nature of deleterious excess of exertion.” Davidson herself emerged as a moderate, sometimes even a traditionalist, on the subject of gender. She discouraged women from racing, writing in her handbook that “a woman’s nervous system suffers a hundred times more than a man’s from this excitement.” She wrote that housewives who took up cycling could return to their work “cheered, refreshed and braced to take up the burden of daily commonplace life once more.” And while she encouraged women to understand how every nut and spoke worked on their machines, she warned that “there is no necessity for her to be constantly airing her knowledge in conversation.” Davidson also occasionally revealed herself as a casual and cruel elitist. When she spoke of assisting “my sisters in their wanderings,” she was speaking exclusively to women of the middle and upper classes. In “Hints to Lady Travellers,” a travel guide she published in 1889, she schooled women on how to purchase train tickets, pack for a trip and embark on long-distance hikes. But she also warned her readers to be careful around servants, who are “drawn from a very inferior class”; referred to a maid as a “feather-headed domestic”; and wrote that “the most unpleasant fellow-travellers” are “ladies’ maids and footmen.” She also cautioned against traveling in certain women-only carriages, which she said attracted “aggressive-looking females.” She wrote as a woman afraid that her newfound freedom would be seized from her if women failed to bike and travel in a way that ultimately reified traditional gender roles and class structures. “Every woman should look upon herself as, in certain measure, an advocate, so to speak, of the pastime among the members of her own sex,” she wrote of cycling. “If she rides in a slovenly, awkward style, and sits her saddle ungracefully — if she dashes frantically along, hot, dusty, and purple of visage, she will surely not win many recruits to the paths of cycling, but frighten them instead, from doing as she has done.” Davidson’s own life was marked by travel. Though she didn’t write much about herself, surviving census and probate records etch out the contours of her movements. She was born in Brooklyn in 1853, and later moved to England, where, she shared an apartment with a couple of other young women, Ménie Muriel Dowie and Alice Werner, at a time when it was still provocative for women to live without men. The writer Ethel F. Heddle novelized their experience in her 1896 book, “Three Girls in a Flat,” in which she described the ambivalent experience when the freedom of living alone collides with “the sordid, matter-of-fact worries incident on having very little money.” Davidson later settled in Southsea, which The Wheelwoman called “that ideal place for cyclists.” In her fiction — she’d ultimately publish 14 novels and many more short stories — Davidson wrote of women who struck out on their own in their youth, only to come around (and often, return home) to the traditional role of marriage. Davidson herself never did. When she died, in her 80s, in 1934, a probate listing of her estate described her as simply: “spinster.” Written by Amanda Hess https://www.nytimes.com/2018/03/08/obituaries/overlooked-lillias-campbell-davidson.html Picture https://en.wikipedia.org/wiki/Lillias_Campbell_Davidson#/media/File:Lillias_Campbell_Davidson.jpg