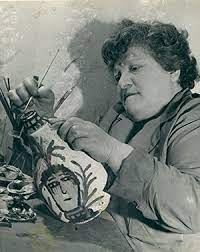 Janet Sobel was a Ukrainian artist, known for pioneering the technique of “drip painting” and heavily influencing the abstract expressionist movement. Sobel was born in Ukraine and emigrated to New York at the age of 15 with her siblings and mother, who worked as a midwife, after her father was killed in an anti-semitic pogrom. She initially prepared herself for the life of a housewife, marrying Max Sobel at the age of 17. It was only in 1939, at the age of 45, that she began to paint, having to invest her own processes due to her lack of an artistic education. Influenced by the growing wave of abstract expressionism in New York she began working with “non-figurative” images, painting, essentially, what she felt. She often used enamel paint, which she quickly dripped onto the canvas with glass pipettes belonging to her husband —a costume jeweler. She soon adopted the automatic style of painting, expressing whatever thoughts were brought out by the canvas and the existing colors, a practice which left her associated with the surrealist movement after her son, having recognized his mother’s talent, showed her artwork to members of the surrealist circle in New York such as André Breton and Max Ernst. Though some art critics, such as Clement Greenberg, dismissed her work as “primitive,” she earned recognition when Peggy Guggenheim took notice of her and, seeing her as one of America’s premier female artists, placed her work in her “Art of this Century Gallery in 1945. That year, she painted her most famous work, “Milky Way,” which still hangs in the Museum of Modern Art. Her art, other than the innovative process, also employed motifs taken from rural Ukrainian life with elements reminiscent of Ukrainian Folk art, though as she shifted to abstract art these were subtly subsumed into her images. Her process, rapid, intense, and inspired, created striking coherent chaos, and influenced artists such as Jackson Pollock, who later became world-famous for this technique of “drip painting.” In 1946, she moved away from New York, and thus the art scene, to New Jersey, and a newly-developed allergy to oil paint accelerated the end of her career. However, her impact would continue to be felt through the artists she influenced, with “Milky Way” being acquired in 1968 by the MoMa for a Jackson Pollock exhibition. Through her innovative process, Sobel was able to rise out of unlikely circumstances to have a profound influence on the art world. Sources: https://www.nga.gov/features/exhibitions/outliers-and-american-vanguard-artist-biographies/janet-sobel.html, https://www.dailyartmagazine.com/janet-sobel-forgotten-female-artist/, https://www.moma.org/collection/works/80636