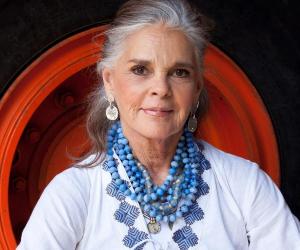 Elizabeth Alice MacGraw, better known as Ali MacGraw, is an award-winning American model, actor, author, designer, and animal rights, activist. She is renowned for her movies ‘Love Story’ (1970), ‘Goodbye, Columbus’ (1969), and ‘The Getaway (1972). Born and raised in an artistic family in New York, she hoped to work in the arts. She began working as a photographer’s assistant and then turned to modeling and acting. She was noticed in her first two movies and received a golden Globe Award for Most Promising Newcomer. MacGraw’s 1970 film, ‘Love Story,’ proved a major hit and fetched her worldwide fame as well as an Academy Award nomination and a golden Globe award. With just three releases, she has been voted the Top female box-office star in the world. In 1972, her hand-footprints and autograph were engraved at Grauman’s Chinese Theater.’ She has starred in several other films, including ‘The Getaway,’ ‘Convoy,’ ‘Players,’ and TV miniseries ‘The Winds of War’ among others. Her autobiography, ‘Moving Pictures,’ was published in 1991. MacGraw has married thrice. MacGraw was born on April 1, 1939, in Pound Ridge, New York, to Frances (née Klein) and Richard MacGraw. Her Jewish mother was a commercial artist, while her father grew up in an orphanage in New Jersey and studied art in Munich. Her younger brother Richard Jr. is also an artist. MacGraw studied at the Rosemary Hall in Greenwich, Connecticut, and later at the prestigious Wellesley College in Wellesley, Massachusetts. With a creative family background, she too wanted to pursue a career in arts. Her childhood wasn’t an easy one, as her parents were not affluent and had their own personal issues, which affected her childhood. In 1960, at the age of 22, MacGraw began working as a photography assistant with the editor of ‘Harper’s Bazaar’ Diana Vreeland, and as a fashion stylist for Melvin Sokolsky at ‘Vogue.’ Her natural beauty was noticed and soon she was asked to model for commercials. She appeared in television commercials such as one for the Polaroid Swinger Camera. Her clean look, which needed little make-up, brought in a new fresh-face trend of looking more natural than made-up. From modeling, she turned to perform and began her acting career in 1968 with a small role in the movie ‘A Lovely Way to Die.’ She was noticed in her next movie ‘Goodbye, Columbus’ (1969), and earned critical acclaim. She was awarded the ‘1970 Golden Globe Award’ for Most Promising Newcomer-Female. During the filming of ‘Goodbye Columbus,’ she became close to Paramount executive Robert Evans and the two got married in 1969. He also helped her in guiding her career. SOURCES · https://www.thefamouspeople.com/profiles/elizabeth-alice-macgraw-666.php · https://www.thefamouspeople.com/ajax/filters.php · https://www.womensactivism.nyc