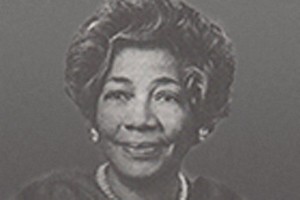 Angie Lena Turner King was one of the first African-American women to gain a degree in chemistry and mathematics, gaining her bachelor’s degree in 1927 and a master’s degree in 1931. She went on to a Ph.D. in mathematics education (University of Pittsburgh, 1955), the first African-American woman to do so. She taught mathematics and chemistry in high schools and colleges. King was a powerful influence on many of her students, including Katherine Johnson (the central mathematician in the book and film Hidden Figures). King graduated from high school at age 14 in 1919. She graduated cum laude from West Virginia State in 1927 with a Bachelor of Science degree in chemistry and mathematics. King began her career in education at West Virginia State High School, West Virginia State's laboratory high school. She attended graduate school during the summers at Cornell University, where she received a master's degree in physical chemistry in 1931. King became an associate professor at West Virginia State College and refurbished its laboratory to improve the quality of her students' scientific research. King later attended the University of Pittsburgh, where she became a Doctor of Philosophy in general education in 1955. In addition to many other affiliations, she was a member of the American Chemical Society, the West Virginia Academy of Science, and the American Association of University Professors. SOURCE https://www.acs.org/content/acs/en/education/whatischemistry/african-americans-in-sciences/angie-turner-king.html