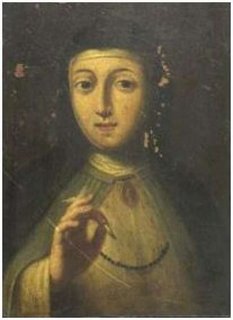 Sister Plautilla Nelli was a self-taught nun-artist and the first-known female Renaissance painter of Florence. She was a nun of the Dominican convent of St. Catherine of Siena located in Piazza San Marco, Florence, and was heavily influenced by the teachings of Savonarola and by the artwork of Fra Bartolomeo. Pulisena Margherita Nelli was born into a wealthy family in the San Felice area of Florence. Her father, Piero di Luca Nelli, was a successful fabric merchant and her ancestors originated from the Tuscan valley area of Mugello, as did the Medici dynasty. There is a modern-day street in Florence, Via del Canto de’ Nelli, in the San Lorenzo district, named for her family, and the New Sacristy of the Church of San Lorenzo is the original site of her family homes. She became a nun at the age of fourteen, taking on the name Suor Plautilla, at the convent of Santa Caterina di Cafaggio; she would later be prioress on three occasions. The facility was managed by the Dominican friars of San Marco, led by Savonarola. About half of all educated girls in that era were placed into convents to avoid the cost of raising a dowry. Savonarola's preachings promoted devotional painting and drawing by religious women to avoid sloth, thus the convent became a center for nun-artists. Nelli had the favor of many patrons (including women), executing large pieces and miniatures. Sixteenth-century art historian Giorgio Vasari wrote, "and in the houses of gentlemen throughout Florence, there are so many pictures, that it would be tedious to attempt to speak of them all." Though she was self-taught, she copied works of the mannerist painter Agnolo Bronzino and high Renaissance painter Andrea del Sarto. Her primary source of inspiration came from copying works of Fra Bartolomeo, which mirrored the classicism-style enforced by Savonarola's artistic theories. Fra Bartolomeo left his drawings to his pupil, Fra Paolino who, in turn left them in the possession of "a nun who paints"[1] in the convent of Santa Caterina da Siena. Nelli signed her paintings as "Pray for the Paintress" after her name, confirming her role in spite of her gender. Her work is distinguished from that of her influencers by the heightened sentiment she added to each of her characters' expressions. Author Jane Fortune referred to her Lamentation with Saints and the "raw emotional grief surrounding Christ’s death as depicted through the red eyes and visible tears of its female figures" as a case in point. Nelli's Lamentation, which is now in the Museum of San Marco, Florence, has also spurred the writings of The Painter-Prioress of Renaissance Florence, written by Jonathan K. Nelson. Most of Nelli's works are large-scale, which was most uncommon for a woman to paint, in her era. She is one of the few female artists mentioned in Vasari's Lives of the Most Excellent Painters, Sculptors, and Architects. Her work is characterized by religious themes, with vivid portrayals of emotion on her characters' faces. Nelli lacked any formal training and her male figures are said to have “feminine characteristics”, as her religious vocation prohibited study of the nude male. Nelli produced mainly devotional pieces including large-scale paintings, wood lunettes, book illustrations, and drawings. Her paintings include Lamentation with Saints (in the large refectory, San Marco Museum, restored 2006), Saint Catherine Receives the Stigmata and Saint Dominic Receives the Rosary, in the Andrea del Sarto Last Supper Museum of San Salvi, both restored in 2008. Nelli's Grieving Madonna, also at San Salvi, is a copy of the same subject by Alessandro Allori. Her Crucifixion is exhibited in the Certosa di Galluzzo Monastery, near Florence. The Last Supper, in the refectory of Santa Maria Novella (not open to the public), is the only work Nelli signed. Her nine drawings in the Uffizi’s Department of prints and Drawings were restored in 2007 and include several representations of the human figure such as Bust of a Young Woman, Head of a Youth, Kneeling Male Figure. The Pentecost, in Perugia’s Basilica of San Domenico, is another of her most significant works, as well as her Annunciation and St. Catherine of Siena both preserved at the Uffizi. Painted in the 1560s, Nelli's Last Supper is a first rendered by a woman. Florence has the richest tradition of paintings with the theme of last supper in the world. Her most significant work because of its size and subject, it is a seven-meter long, oil on canvas. Last Supper was under restoration for four years. The work then went on exhibit in October 2019 at the Santa Maria Novella Museum in Florence, across from Alessandro Allori’s painting with the same theme, also painted in the sixteenth century. Nelli’s work represents a daring creative endeavor for a nun-artist of her period, as most were relegated to producing miniatures, textiles or small sculptures in painted terra cotta or wood. By creating and signing this enormous fresco like work depicting one of Florence’s most loved spiritual subjects, Nelli successfully placed herself among the ranks of her male counterparts, such as Leonardo Da Vinci, Andrea del Sarto and Domenico Ghirlandaio, an accomplishment lost to history for many centuries. Due to the recent restoration of the Lamentation, there has been more investigation into Nelli’s life and art. https://en.wikipedia.org/wiki/Plautilla_Nelli