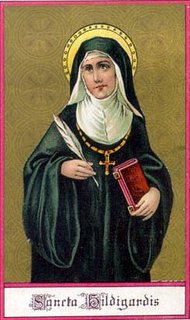 Hildegard of Bingen, also known as Saint Hildegard and the Sibyl of the Rhine, was a German Benedictine abbess, writer, composer, philosopher, Christian mystic, visionary, and polymath. She is one of the best-known composers of sacred monophony, as well as the most-recorded in modern history. She has been considered by many in Europe to be the founder of scientific natural history in Germany. Hildegard was born of noble parents and was educated at the Benedictine cloister of Disibodenberg by Jutta, an anchorite (religious recluse) and sister of the count of Spanheim. Hildegard was 15 years old when she began wearing the Benedictine habit and pursuing a religious life. She succeeded Jutta as prioress in 1136. Having experienced visions since she was a child, at age 43 she consulted her confessor, who in turn reported the matter to the archbishop of Mainz. A committee of theologians subsequently confirmed the authenticity of Hildegard’s visions, and a monk was appointed to help her record them in writing. The finished work, Scivias (1141–52), consists of 26 visions that are prophetic and apocalyptic in form and in their treatment of such topics as the church, the relationship between God and humanity, and redemption. About 1147 Hildegard left Disibodenberg with several nuns to found a new convent at Rupertsberg, where she continued to exercise the gift of prophecy and to record her visions in writing. A talented poet and composer, Hildegard collected 77 of her lyric poems, each with a musical setting composed by her, in Symphonia armonie celestium revelationum. Her numerous other writings included lives of saints; two treatises on medicine and natural history, reflecting a quality of scientific observation rare at that period; and extensive correspondence, in which are to be found further prophecies and allegorical treatises. She also for amusement contrived her own language. She traveled widely throughout Germany, evangelizing to large groups of people about her visions and religious insights. Her earliest biographer proclaimed her a saint, and miracles were reported during her life and at her tomb. However, she was not formally canonized until 2012, when Pope Benedict XVI declared her to be a saint through the process of “equivalent canonization,” a papal proclamation of canonization based on a standing tradition of popular veneration. Later that year Benedict proclaimed Hildegard a doctor of the church, one of only four women to have been so named. As one of the few prominent women in medieval church history, Hildegard became the subject of increasing interest in the latter half of the 20th century. Her writings were widely translated into English; several recordings of her music were made available; and works of fiction, including Barbara Lachman’s The Journal of Hildegard of Bingen (1993) and Joan Ohanneson’s Scarlet Music: A Life of Hildegard of Bingen (1997), were published. britannica.com/biography/Saint-Hildegard