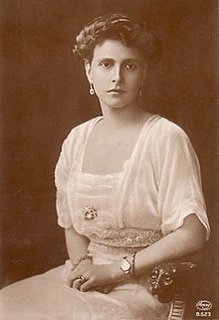 Princess Alice was born in Windsor Castle in 1885, as Princess Victoria Alice Elizabeth Julia Marie. Her parents were Prince Louis of Battenberg and Princess Victoria of Hesse, granddaughter of Queen Victoria. The Princess was related to most European royal families. When she was a young child, her deafness was diagnosed, and by the age of eight, she had become a fluent lip reader. This handicap may have made her especially sensitive to the underprivileged and outcast. Princess Alice married Prince Andrew of Greece in 1903. The couple had five children: four daughters and a son – the future Duke of Edinburgh and consort to Queen Elizabeth II of England. During World War II, Princess Alice lived in the Athens palace of her brother in law, Prince George of Greece, and worked with the Swedish and Swiss Red Cross. She found herself in the difficult situation of having sons-in-law fighting on the German side and a son (the future Prince Philip) in the British Royal Navy. The Greek royal family had been well acquainted with the family of Haimaki Cohen, a Jew and former member of Parliament, from Tricala, in northern Greece. In 1941, when Germany invaded Greece, the family fled to Athens – then still under Italian rule, where the anti-Jewish policy was more moderate. However, the period of relative safety lasted only until September 1943, when following Italy's surrender to the Allies, the Germans occupied Athens and the hunt for Jews began. By that time Haimaki Cohen had died. His widow, Rachel, and her five children were looking for a place of refuge. The family's four sons wanted to cross to Egypt, and join with the Greek government in exile that was in Cairo. But the trip proved too hazardous for Rachel and their sister. Princess Alice heard of the family's desperate situation and offered to shelter Rachel and her daughter, Tilde, at her home. They were later joined by another son who was unable to make the journey to Egypt and had to return to Athens. The Cohens stayed in Princess Alice's residence until liberation. There were times when the Germans became suspicious, and Princess Alice was even interviewed by the Gestapo. Using her deafness, she pretended not to understand their questions until they left her alone. In January 1949, the princess founded a nursing order of Greek Orthodox nuns – the Christian Sisterhood of Martha and Mary. She decided to withdraw from the world and moved to the island of Tinos. Following the colonels’ coup d’etat in Greece in 1967 she went back to England and moved to Buckingham Palace to be close to her son and his family. She died in London in December 1969, aged 84. Not long before her death Princess Alice expressed the wish to be buried in Jerusalem, next to her aunt, Grand Duchess Elizabeth Fyodorovna, who, like Princess Alice, had become a nun and had founded a convent. The Grand Duchess Fyodorovna was killed during the Russian revolution and her remains were buried in the Church of Maria Magdalene in the Garden of Gethsemane in Jerusalem. In 1988, nineteen years after her death, Princess Alice’s coffin was transferred to the crypt in Gethsemane on the Mount of Olives in Jerusalem. In 1993 Yad Vashem bestowed the title of Righteous Among the Nations on Princess Alice. A year later, her children, Prince Philip – the Duke of Edinburgh – and Princess George of Hanover traveled to Yad Vashem and planted the tree in her honor. During the ceremony, Prince Philip said: "I suspect that it never occurred to her that her action was in any way special. She was a person with deep religious faith and she would have considered it to be a totally human action to fellow human beings in distress."