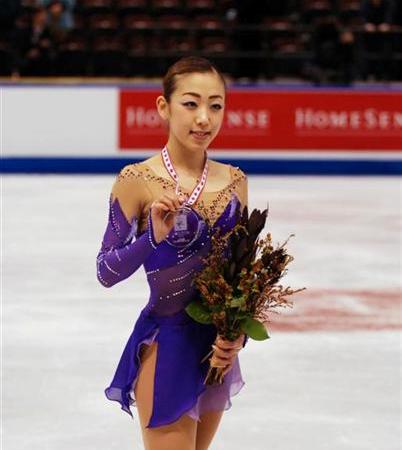 Fumie Suguri is former Japanese figure skater and is a three-time world medalist a three-time Four Continents champion, the 2003 Grand Prix Final champion, and a five-time Japanese National champion. She is also the first out female figure skater to have competed in world-class competitions. Fumie Suguri was born on December 31, 1980 in Chiba, Chiba, Japan. Her younger sister, Chika was also a figure skater and their father was a pilot for JAL and due to his job, they moved all the way to Anchorage, Alaska. Suguri began learning how to figure skate at age five. Then, when she returned back to Japan, Suguri began formal training under 10-ten time Japanese National champion winner, Nobuo Sato. In 1994, while visiting the practice rink for the 1994 World Championships, Suguri was taught the triple Lutz jump (an extremely difficult figure skating move) by Michelle Kwan, who was competing in the event. In 1997, Fumie Suguri became Japan's national champion for the first time. Her second national title was granted to her in the 2000-2001 season. Later, she went on to win gold at the 2001 Four Continents, which made her become the first Japanese woman to win the competition. In 2001 to 2002, Fumie Suguri won her third national title and competed at the 2002 Winter Olympics, where she then placed fifth. A month later, Suguri won the bronze medal at the 2002 World Championships, behind Michelle Kwan and Irina Slutskaya. Her bronze medal at Worlds was the first medal for a Japanese woman at the World Championships since Yuka Sato won the title in 1994. Then in 2002 to the 2003 season, Suguri won her fourth national title was awarded gold at Four Continents and repeated as the bronze medalist at the World Championships, this time behind Kwan and Elena Sokolova. In 2003 to 2004, Suguri won the gold medal at the NHK Trophy and bronze at the Cup Of China, meaning she qualified for the Grand Prix Final. In the Grand Prix Final, Suguri defeated Sasha Cohen, making her the first Japanese woman to win gold at the competition. During the next three years, Fumie Suguri would end up becoming the first Japanese woman to earn three World Championship medals! In her long running figure skating career, Fumie Suguri decided to retire from competitive skating on November 13, 2014. That same year she came out as bisexual to the whole world! Fumie Suguri is a an inspirational and exceptional role model for young women everywhere! She broke down barriers, allowing other women of color (just like her) to dominate and thrive in fields where it’s not common. She thrived as a figure skater and was probably the best at what she done! Second of all, Fumie Suguri coming out as bisexual paved a newfound way for more women and young girls to be true to who they are! In a sport where women are pressured to live up to strict standards of femininity, Suguri branched out and stayed true to herself! Thus, I believe in the span of Fumie Suguri’s career and her work is truly inspiring and compelling to young women around the globe!