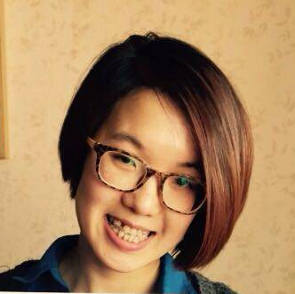 Wei was born in Hechi in the southern region of Guangxi in China. In 2009, Wei received a LL.B. in sociology from Wuhan University. In 2011, Wei received a LL.M. in anthropology from Wuhan University. While in college, Wei became active in the women's and LGBT rights movements. In 2007 and 2009, Wei assisted in coordinating and staging productions of The Vagina Monologues. She joined the Wuhan Rainbow, a LGBT organization. Wei also served as director of Ji’ande, an LGBT rights organization in Beijing. Wei co-founded the National Bisexual Network in China. From 2011 to 2016, Wei worked as a project manager at the Beijing Gender Health Education Institute, a national agency centered around sexuality and sexual health, raising awareness about gender inequities and sexual diversity. Part of her work included helping to organize an annual AIDS Walk on the Great Wall, the China AIDS Walk, the first large-scale HIV/AIDS public fundraising project in mainland China, coordinating the Mainstream Media Awards for good LGBT community reporting, and coordinating the organization's Rights and Advocacy program & annual National LGBT conference in China. Wei co-hosted China's first non-profit LGBT webcast called "Queer Comrades", was a member of the China, Taiwan, and Hong Kong-based network Queer Lala Times, and attended women's conferences in India and South Korea. In 2012, Wei Tingting and Li Tingting participated in a Valentine's Day protest against domestic violence in Beijing. From 2012 to 2014, Wei was a project manager at Chinese Lala Alliance. From 2013 to 2014, Wei was a contributor to Les+ Magazine and coordinated a project called “View Beijing+20 from Lesbian perspective”. From 2015 to 2017, Wei was a coordinator at LGBT Rights Advocacy CHINA, where she worked with victims of LGBT conversion therapies to help them bring legal cases, and also support lawsuits against homophobic teaching materials. From 2016 to 2019, Wei was the founder and director of the Guangzhou Gender and Sexuality Education Center (GGSEC), a non-governmental organization in Guangzhou, China. The organization conducts gender and sexuality education, training and advocacy activities. Wei collected material for the first Chinese documentary film about bisexuality in China, which was called Bi China and was released in 2017. In 2018, Wei founded the Guangzhou Nalisha Education Consulting Co., Ltd., a company that conducts gender and sexuality research, education, training and advocacy activities, offering mental health support and consulting support for victims in gender and sexuality field to against discrimination to women and LGBTI community.