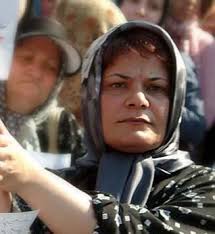 Mahboubeh Abbasgholizadeh is an Iranian women's rights activist who has played an important role in Iran since the 1990s. She is an active member of the Stop Stoning to Death Campaign and the Iranian Women's Charter. She was the director of the Non-Governmental Organisation Training Centre (NGOTC) and the director of the Association of Women Writers and Journalists NGO. She was also the chief editor of Farzaneh Women's Studies Journal and the director of Entesharate Banoo (Banoo publication) and Entesharate Jamee Iranian (Iranian society publication). She has attended numerous international and national conferences, and she is a regular contributor to Sharg (East), the most popular opposition newspaper in Iran and Zanan (Women), the first independent journal after the Iranian Revolution that specifically dealt with women's issues. In the 1990s, the conservatives in control of the judiciary objected to the reform movement and closed down many newspapers, journals, and publications. Abbasgholizadeh established the Association of Women Writers and Journalists NGO. Her aim was to support unemployed female media workers by facilitating income-generating activities for them. She explained: "I did not give them money. I organised projects and exhibitions and suggested to them to work for these projects and exhibitions. I provided them with computers and cameras. Once they completed the projects and the exhibitions, they benefited intellectually and financially" (Rostami-Povey). Through her activities, she also raised the issue of women's right to work and the undemocratic nature of the closure of newspapers, journals, and publishing houses (Rostami-Povey 2004 and 2005). Mahboubeh Abbasgholizadeh will certainly go down in history as a prominent Iranian women's rights activist.