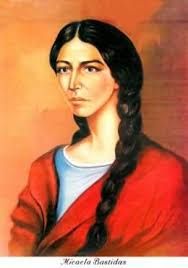 Miceala Bastidas Puyucahua was an incredible indigenous leader in Latin America’s history of combating Spanish colonialism. She led the rebellion against the Spanish alongside her husband Túpac Amaru II. They both suffered martyrdom of execution by the Spaniards when the revolt failed. Micaela was born in 1746 in Pamapamarca to Manuel Bastidas, whom is believed to have been of African descent, and Josefa Puyucahua Sisa, her indigenous mother. Micaela was raised in the Catholic religion. She spoke Quechua, the indigenous language spoken by the people living in the Peruvian Andes, better than Spanish and had little formal schooling. On May 25, 1760, at the age of fifteen, Micaela married José Gabriel Condorcanqui, who later changed his name to Túpac Amaru II, who came from the Incan royal line. In 1764, he was name cacique or kuraka, a title given to leaders of indigenous groups that can be translated into “king” or “prince”, of the territories within his legacy. The title and perquisites of power were hereditary. He received a privileged education in a school for the sons of indigenous lords. He spoke and wrote Spanish, spoke Quechua, and knew some Latin. Together they had three sons and were well off. As time passed and as a person of mixed roots, he began to develop a libertarian ideology based on the defense of indigenous people, slaves, creoles, and people of mixed races, while guiding the independence of the territory and commerce from the decisions of the crown of Spain. Túpac Amaru II, at Micaela’s urging, began attacking Spanish owned areas. These acts of revolt snowballed into a full-blown rebellion in Peru against Spanish authority. Micaela would lead alongside her husband in this rebellion and contributed in major ways. Micaela’s main role in the rebellion was to recruit soldiers for the rebellion. She was successful in gaining recruits and maintaining her people’s loyalty to the rebellion. Micaela also maintained a dominant authority over the areas the rebellion controlled. She acquired goods and food for the soldiers and the communities she controlled. Her dominant personality, high ascribed status and commitment to the cause of indigenous rights and liberty from Spanish oppression led people to refer to her as Clara Micaela Bastidas or Queen Micaela Bastidas. She was also known as being a better strategist and more daring than her husband. She encouraged Amaru to march on Cuzco quickly in order to surprise the Spanish and take advantage of their weakened city guard. However, Amaru held off the advance which allowed the Spaniards to bring in reinforcements and capture Bastidas, Amaru, their eldest son, and many of their soldiers. Micaela Bastidas Puyucahu was executed on May 18, 1781, at the age of 36. Micaela Bastida’s role in Peru’s rebellion against Spanish rule is significant because she counteracted rigid gender roles as she was respected for her “masculine” traits which garnered her great respect from her rebel army and the indigenous people of Peru.