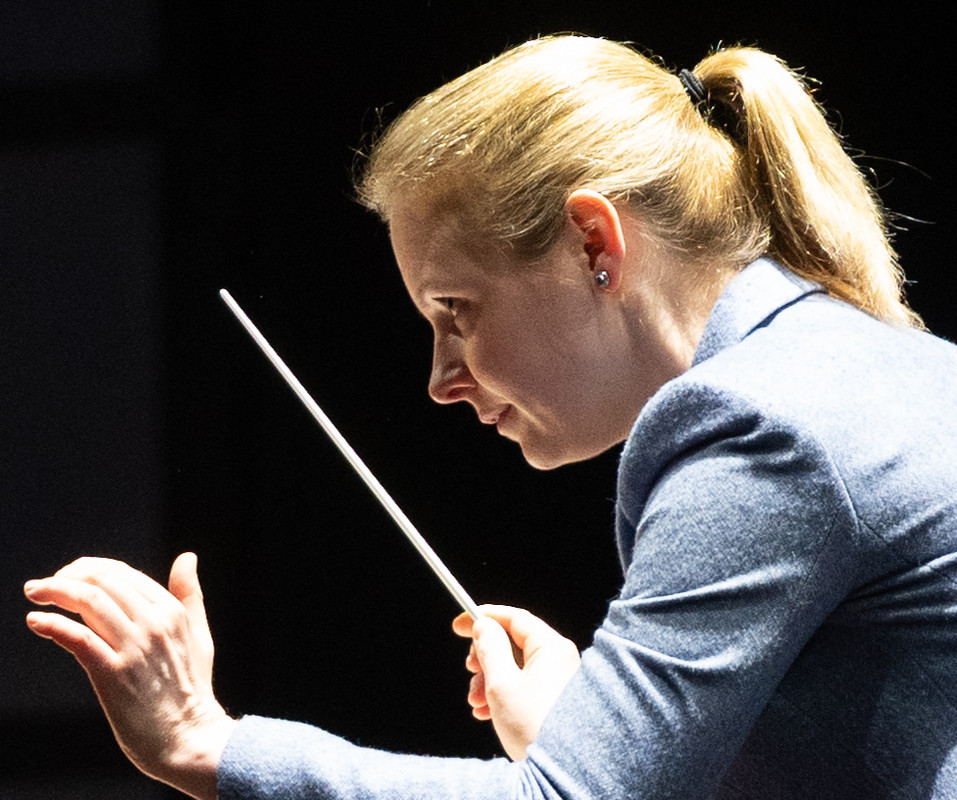 Gemma New is a conductor who was born in Wellington, New Zealand, and is now the music director of the Hamilton Philharmonic Orchestra in Ontario, Canada, and the resident conductor of the St. Louis Symphony Orchestra. At only 34 years old, she has accomplished a lot in a short time. Ms. New has been a musician since she was a young child, playing violin since she was 5 and piano since she was 8. She began playing in an orchestra at the age of 9 and her first experience conducting, when she was just 15, she claims is when her future “fell into place for me.” Ms. New pursued her undergraduate education at New Zealand’s University of Canterbury, graduating with honors in violin performance as well as a degree in mathematics. She held her first conducting job while still in school, as the conductor of the Christchurch Youth Orchestra. And she still utilizes her math degree, having created her own “language” based on Algebra and using it help her memorize the music she conducts. For graduate studies in conducting, Ms. New moved to the United States to attend the Peabody Institute at Johns Hopkins University in Baltimore, Maryland. While at the Peabody she founded the Lunar Ensemble, a group of Peabody students and alumni who perform works by living composers, so she could conduct musicians playing contemporary music. In 2013 she made her Carnegie Hall debut conducting works by contemporary classical composers John Adams and Andrew Norman. In her career she has also been a Dudamel Conducting Fellow with the Los Angeles Philharmonic, was selected by members of the Vienna Philharmonic for a Salzburg residency, and studied with Kurt Masur in Leipzig as a Felix Mendelssohn-Bartholdy Fellow. She has conducted throughout the world with such orchestras as the Atlanta Symphony, the Toronto Symphony, the Los Angeles Chamber Orchestra, The Scottish National Orchestra, and the Orchestre de Chambre de Lausanne. Ms. New was the assistant conductor of the New Jersey Symphony Orchestra from 2011 to 2016 before assuming her current role as music director with the Hamilton Philharmonic; she is the first woman ever in that position. In addition to her role as resident conductor in St Louis, she is also the music director of the St. Louis Youth Symphony. In Hamilton and St. Louis, working with youth and community outreach are extremely important to her, reminding her of when she first became involved with orchestral music at such a young age. “I am passionate about young people playing together in orchestras and I love being a part of it every single time.” Marie-Hélène Bernard, president and CEO of the St. Louis Symphony Orchestra described Ms. New this way: “I think she’s a rare talent. In my 20-plus years in the business I have rarely seen someone like her. She understands music deeply and in ways that are very natural. I call her a natural … her passion is contagious.”