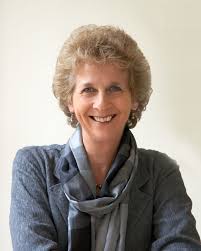 Dr. Jane Glover is a sought-after conductor who specializes in the music of the Baroque period and is the Music Director of Music of the Baroque, an ensemble based in Chicago. Born in Helmsley, North Yorkshire, England, Dr. Glover was musically inclined from a young age. Throughout her youth she played both piano and oboe and as she grew older she developed an interest in conducting. In recent interviews she has discussed two galvanizing moments of her youth: at nine years old, when she first saw Handel’s Messiah performed, “…it basically blew me away”; and as a 16-year-old when she met Benjamin Britten, “my hero,” when the composer and pianist came to perform at the school where her father was headmaster and stopped in at her home before his concert, met her, and took her musical aspirations seriously. Dr. Glover studied music at St Hugh’s College, Oxford, and completed her DPhil for research on seventeenth-century Venetian opera. She has since returned to Oxford as a visiting professor. She made her conducting debut in 1975 at the Wexford Festival, a world-renowned opera festival, and went on to become musical director of Glyndebourne Touring Opera from 1981 to 1985. During the 1980s she was also the artistic director of the London Mozart Players, held principal conductorships at Huddersfield Choral Society and the London Choral Society, and was regularly broadcast on BBC Television, hosting the television series Orchestra with Jane Glover and Mozart – His Life with Music. Extensive touring throughout the world led Dr. Glover to Chicago in 2000 to lead the choral and orchestral ensemble Music of the Baroque in a production of Monteverdi’s L’Orfeo. The ensemble was searching for a new director, so Glover returned in 2001 to lead a set of concerts. She was one of seven conductors who was “tried out” in this way and she won the position. She has been Music of the Baroque’s Director since 2002, and recently signed a new contract through the 2022-2023 season, making her one of the longest serving music directors in the history of Chicago. Dr. Glover has conducted all the major symphony and chamber orchestras in Britain, as well as many others throughout the world, including the New York Philharmonic, the Orchestra of St. Luke’s, and the Bamberg Symphony. She also conducts opera, having appeared with numerous companies including the Glimmerglass Opera, the Royal Opera, the Teatro Real of Madrid, and the Royal Danish Opera. Considered a Mozart and Handel specialist, in December 2013, Dr. Glover became the third woman ever to conduct at the Metropolitan Opera of New York when she led Julie Taymor’s production of Mozart's The Magic Flute. She also frequently collaborates with the choreographer Mark Morris and has conducted major productions of Handel and Mozart for his dance group. She is also the author of two highly-praised books, Mozart’s Women and Handel in London.