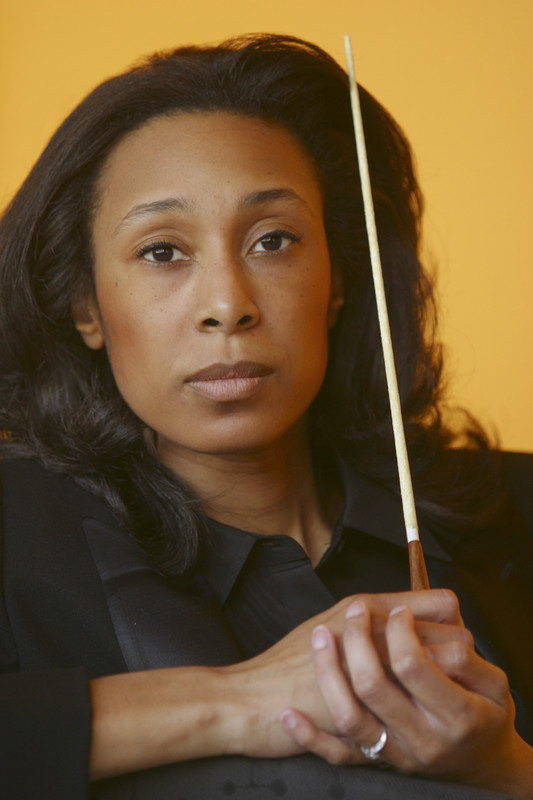 Jeri Lynne Johnson is a conductor and the Founder and Artistic Director of Philadelphia’s Black Pearl Chamber Orchestra. Ms. Johnson was born in 1972 and had a somewhat itinerant childhood due to the nature of her parents’ work. Music, however, was always a constant. She studied piano from the age of four, no matter her changing schools. And when she was seven years old, a family friend took her to see Sir Neville Mariner conduct Beethoven with the Minnesota Symphony, and her desire to become a conductor was born. She has said that hearing orchestral music made her want to “play the whole piece” not just one instrument’s part, and to achieve her goal she needed to be a conductor because for the conductor “the orchestra is the instrument.” Ms. Johnson pursued her goal by studying music and religion at Wellesley College and then earning a Master’s degree in Music History and Theory from the University of Chicago. In 1998 she won the Jorge Mester Conducting Scholarship to attend the Aspen Music Festival. From 2001-2004, she was the assistant conductor of The Chamber Orchestra of Philadelphia. In 2005, Ms. Johnson became the third recipient of the Taki Concordia Conducting Fellowship, a prestigious conducting fellowship established by world-renowned conductor Marin Alsop, “to promote, present, and encourage talented women conductors at the beginning of their professional careers.” There are still very few women conducting at the highest levels, and practically no African-American women and despite of all her successes, Ms. Johnson struggled to secure a position as principal conductor. In various press interviews she has discussed her frustration and bewilderment at this, and said that after asking for feedback from a selection committee who did not hire her, she was told, “I did not look like what our audience expects our conductors to look like.” Ms. Johnson realized that if she wanted more opportunities to conduct and more control over what she conducted she should form her own orchestra. In 2008 she founded the Black Pearl Chamber Orchestra with the goal of creating an orchestra that would “remain relevant in today’s society.” She wanted to establish an organization that would embrace audience diversity in many forms—cultural, economic, age—as well as promote diversity within the ranks of its musicians. The orchestra’s motto is “Many Cultures, One Pearl.” Ms. Johnson has had great success in achieving these goals: The Black Pearl Chamber Orchestra received the PNC Arts Alive Award for Innovation, is the only organization in the country to win three Knight Foundation Arts Challenge grants, and has been called “a model for the 21st Century Orchestra.” Philadelphia’s public television station WHYY produced an inspiring piece on Jeri Lynne Johnson and the Black Pearl Chamber Orchestra for its program Friday Arts, it is available here: https://whyy.org/segments/jeri-lynne-johnson-taking-lead/