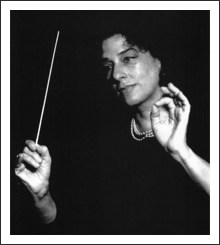 Gillian B. Anderson is an American conductor, musicologist, and author. Ms. Anderson was born in Brookline, Massachusetts, in 1943. She attended Bryn Mawr College for her undergraduate education and went on to receive a Master of Music in Musicology from the University of Illinois at Urbana and a Masters in Library Science from the University of Maryland. Ms. Anderson worked as a music librarian at the Library of Congress for 17 years, leaving the position in 1995 to pursue a career as a conductor and writer. Her educational background and experience as a librarian ignited and fed her interest in discovering, researching, reconstructing, and conducting the orchestral scores of silent films. Ms. Anderson is often quoted as saying, “There is no such thing as a silent film.” Musical scores were always integral parts of “silent” films. The scores of early silent films were often partly original composition and partly or sometimes wholly “borrowed” music, using pieces already familiar to an audience to evoke desired emotions or moods. Ms. Anderson’s work entails discovering extant pieces, notes, or descriptions of scores—often very little original material still exists—and reconstructing a full orchestral score from the disparate parts. Her diligent research involves locating archival material about the music, the composer, and the filmmaker, as well as cultivating a near-obsessive familiarity with the film itself based on the hundreds of viewings required to sync the score precisely to the film. Ms. Anderson has contributed to the restoration and reconstruction of the original scores for more than 40 important silent films. She has conducted her scores in accompaniment with their projection in performance throughout North and South America and Europe. Her work includes scores for important early films such as D.W. Griffith’s Birth of a Nation (1915), F.W. Murnau’s Nosferatu (1922), Charlie Chaplin’s The Circus (1928), and Cecil B. DeMille’s The Ten Commandments (1923). Among the many orchestras she has conducted are the Brandenburg Philharmonic, the Brooklyn Philharmonic Orchestra, the Columbus Symphony, the London Philharmonic Orchestra, and the National Symphony. Her performances have been hailed as “triumphant” by The Washington Post and “extraordinary” by The New York Times. A prolific writer, Ms. Anderson is the author of several books including Music for Silent Films, 1894-1929: A Guide (available in pdf form through the Library of Congress website), as well as many scholarly articles and a translation of Ennio Morricone and Sergio Miceli’s Composing for the Cinema. She is also the co-founder of the journal Music and the Moving Image. Ms. Anderson’s vital contributions to both the scholarship of silent film scores and the reinvigoration of performance of those scores cannot be overestimated.