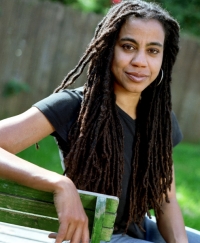 If Suzan-Lori Parks hadn’t taken a class with Mount Holyoke professor Leah B. Glasser, the world might have been short a brilliant playwright. Originally at Mount Holyoke with dreams of becoming a scientist, Parks changed course when she discovered her passion and talent for writing in Glasser’s class. The Pulitzer Prize-winning dramatist’s career had its humble beginnings with the opening of her first play in front of five audience members in an old neighborhood bar. Parks was encouraged by this experience, though—“a show in New York!” she’d later say, recalling the exciting birth of her career. Soon Parks’s plays traveled from bars to Broadway as her work gained recognition. Grappling with such themes as gender, race, class, sex, and beauty, Parks wrote popular plays including Imperceptible Mutabilities in the Third Kingdom, In the Blood, and Venus. Parks became the first African American woman to win the Pulitzer Prize for Drama for her play Topdog/Underdog. She’s a two-time OBIE award winner and a MacArthur genius grant winner. She has been named one of Time magazine’s “100 Innovators for the Next New Wave.” During 2002–2003, Parks wrote one short play every day for her 365 Days/365 Plays series. Produced in over 700 theaters worldwide, these plays contributed to one of the largest grassroots playwright collaborations ever. Not confined to writing for stage, Parks also wrote the screenplay for Spike Lee’s Girl 6 and also adapted Zora Neale Hurston’s classic novel 'Their Eyes Were Watching God', which premiered on ABC’s Oprah Winfrey Presents. Parks’s modern theatre adaption of the 1935 opera Porgy and Bess, titled The Gershwins’ Porgy and Bess, is currently playing on Broadway. Parks currently serves on the Mount Holyoke Board of Trustees.