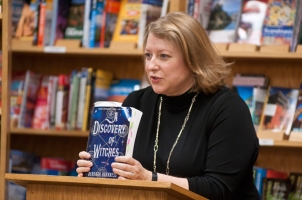 University of Southern California professor of history Deborah Harkness has won wide acclaim for her academic work in the history of science. A Renaissance studies major at MHC, she won tenure a mere five years after earning her Ph.D. Harkness built her career writing and teaching about the sixteenth century, a time when scientific and supernatural explanations for natural events vied for acceptance. So she was understandably intrigued by popular culture’s similar fascination with the occult. Her musings led eventually to A Discovery of Witches, the saga of fiercely independent historian of alchemy (and descendent of witches) Diana Bishop and dashing geneticist (and vampire) Matthew Clairmont. The novel debuted at #2 on the New York Times best-seller list and is the first part of a trilogy. The second part, Shadow of Night, also a New York Times best-seller, was released in July 2012. In the novel, Harkness performs some alchemy of her own, magically transforming her academic knowledge into an engrossing tale full of intellectual wonders. Whether writing scholarly tomes or novels, Harkness says she has “a character-driven approach to history. I try never to forget that these were real people who had emotions and troubles, but historical evidence can give me only so much access to their world. What I love about fiction is that there’s no boundary.” Her award-winning nonfiction works include The Jewel House: Elizabethan London and the Scientific Revolution and a book on English natural philosopher and occultist John Dee. Harkness credits Mount Holyoke with giving “women the tools to craft for themselves the ideal life of the Renaissance—one that mixes contemplation with activity—to become ideal citizens of the world.”