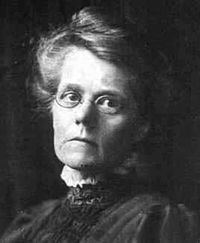 Alicia Boole was the third of the five daughters of Mary Evert Boole. Despite having no formal education in mathematics, she still possessed a great power of geometric visualization in hyperspace. From the age of seventeen until her death, she remained interested in regular and semi-regular four-dimensional polytopes and made several important discoveries in this area. For example, she showed that there were 6 regular polyhedra in 4-dimensional space and made physical models related to her work. Alicia began her mathematical training with her mother. She also was influenced by the amateur mathematician Charles Hinton, a school teacher interested in four-dimensional geometry. Between 1880 and 1895 Alicia worked alone on her geometric pursuits. In 1890 she married Walter Stott, an actuary in Liverpool, with whom she had two children. In 1895 she began her collaboration with Professor Peiter Schoute of the University of Groningen, and he also helped to publish some of her own work. According to H.S.M. Coxeter [2], "Mrs. Stott's power of geometrical visualization supplemented Schoute's more orthodox methods, so they were an ideal team." Stott published six papers between 1900 and 1910, three co-authored with Schoute. In her 1910 article on "Geometrical deduction of semiregular from regular polytopes and space fillings," she was the first person to enumerate and describe all 45 semiregular polytopes. After Schoute's death in 1913, the University of Groningen conferred upon Stott an honorary degree and exhibited her geometric models. According to Polo-Blanco [5], it appears that Stott abandoned her mathematical work after Schoute's death in 1913. In 1930, however, she began a collaboration with Coxeter, at that time a graduate student at Cambridge University, in the investigation of a special kind of four-dimensional polytope for which she made models of its sections. This collaboration continued until her death in 1940.