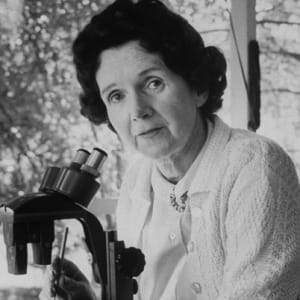 A marine biologist and nature writer, Rachel Carson catalyzed the global environmental movement with her 1962 book Silent Spring. Outlining the dangers of chemical pesticides, the book led to a nationwide ban on DDT and other pesticides and sparked the movement that ultimately led to the creation of the US Environmental Protection Agency (EPA). Born on May 27, 1907 on a farm in Springdale, Pennsylvania, Carson was the youngest of Robert and Maria McLean Carson’s three children. She developed a love of nature from her mother, and Carson became a published writer for children’s magazines by age 10. She attended the Pennsylvania College for Women (now Chatham University), graduating magna cum laude in 1929. She next studied at the oceanographic institute at Woods Hole, Massachusetts and at Johns Hopkins University, where she received a master’s degree in zoology in 1932. Strained family finances forced her to forego pursuit of a doctorate and help support her mother and, later, two orphaned nieces. After outscoring all other applicants on the civil service exam, in 1936 Carson became the second woman hired by the US Bureau of Fisheries. She remained there for 15 years, writing brochures and other materials for the public. She was promoted to Editor-in-Chief of all publications for the US Fish and Wildlife Service. Meanwhile, she wrote several popular books about aquatic life, among them Under the Sea Wind (1941) and The Sea Around Us (1951). The latter was serialized in the New Yorker and sold well worldwide. She won a National Book Award, a national science writing-prize and a Guggenheim grant, which, with the book’s sales, enabled her to move to Southport Island, Maine in 1953 to concentrate on writing. In 1955, she published The Edge of the Sea, another popular seller. She also began a relationship with Dorothy Freeman, a married summer resident. Though much of their correspondence was destroyed shortly before Carson’s death, the rest was published by Freeman’s granddaughter in 1995 as Always, Rachel: The Letters of Rachel Carson and Dorothy Freeman, 1952–1964: An Intimate Portrait of a Remarkable Friendship. Chemical companies sought to discredit her as a Communist or hysterical woman. Many pulled their ads from the CBS Reports TV special on April 3, 1963, entitled “The Silent Spring of Rachel Carson.” Still, roughly 15 million viewers tuned in, and that, combined with President John F. Kennedy’s Science Advisory Committee Report—which validated Carson’s research—made pesticides a major public issue. Carson received medals from the National Audubon Society and the American Geographical Society, and induction into the American Academy of Arts and Letters. Seriously ill with breast cancer, Carson died two years after her book’s publication. In 1980, she was posthumously awarded the Presidential Medal of Freedom. Her homes are considered national historic landmarks, and various awards bear her name.