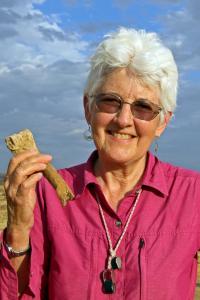 Anna “Kay” Behrensmeyer received her undergraduate degree from Washington University in St. Louis and her Ph.D. from Harvard University. Her work has spanned a range of fields including anthropology, geology, paleobiology, evolutionary biology and ecology, but most of her research has focused specifically on taphonomy. Taphonomy is the study of the processes that affect animal and plant remains as they become fossilized as well as the processes themselves. She has had a prominent career and in 2002 she was selected as one of the 50 most important scientists by Discover magazine. But early on in her career she was caught up in a controversy over the dating of a discovery she made at Koobi Fora in Kenya alongside Richard Leakey. In 1968, after a colleague recommend to Richard Leakey that he should bring along geologists to his next venture in Kenya, Leakey began searching for accompaniment. Leakey noted that while ‘only’ a graduate student she had “proved that she was capable of excellent field work in East Africa.” After only six days after her arrival at camp Koobi Fora, Behrensmeyer discovered a plethora of ancient stone tools within a tuff (volcanic ash). The tools were dated 2.4 million years ago, which was nearly 600,000 years old than those found at Olduvai. It was a momentous discovery for the young scientist that resulting in the particular tuff being named after her, the “Kay Behrensmeyer Site” Tuff. Not long after the exciting discovery, however, speculation arose over the accuracy of the dating. It was reported that the samples were in fact contaminated, and took much longer to be dated. This caused controversy throughout the field of paleoanthropology. There have been additional tests of the KBS Tuff by other scholars in the field which revealed dates ranging from 1.8 to 1.6 million years. These new dates put Behrensmeyer’s findings at the same age as those found by Louis and Mary Leakey at the Olduvai Gorge nearly forty years earlier. While the tools found at the KBS Tuff were perhaps not the oldest in the world, it was still a magnificent find. Her determination has followed her since she began her journey – and luckily, she has no intention of stopping her explorations any time soon so it can be expected that her discoveries will continue to be published for years to come. Written by Sarah Bergman, Caroline Marie Russell, Erica Schultz, Olivia Weltz for the course “Gender and Human Evolution”, taught by Caroline Van Sickle and published as part of the Women in Paleoanthropology special collection. SOURCE https://trowelblazers.com/kay-behrensmeyer/