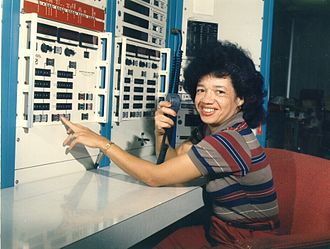 Dr. Christine Darden is an American mathematician, data analyst, and aeronautical engineer who devoted much of her 40-year career in aerodynamics at NASA to researching supersonic flight and sonic booms. She was born in Monroe, North Carolina as the youngest of five children. Both parents encouraged her to pursue a quality education. Darden attended Winchester Avenue High School and then transferred to Allen High School, a Methodist boarding school (formerly the Allen School for Negro Girls), in Asheville, North Carolina. She graduated as the class valedictorian in 1958, subsequently receiving a scholarship to attend Hampton University, a historically black college then known as Hampton Institute. During her studies at Hampton, she participated in some of the early protests of the Civil Rights Movement. Mann graduated from Hampton with a B.S. in Mathematics in 1962. She also earned a teaching certification and taught high school mathematics for a brief time. In 1965 she became a research assistant at Virginia State College studying aerosol physics. At Virginia State, Darden earned an M.S. in 1967 and taught mathematics there. That same year she was hired by NASA as a data analyst at Langley Research Center. Darden started in the “computer pool,” performing calculations as a computer for engineers. By that time, computers were increasingly used for the complex calculations to support engineering and design. She began automating the process by writing computer programs. After moving into more aeronautical research, in 1973 Darden was promoted to a position as aerospace engineer. Her early findings in the 1960s and 1970s resulted in a revolution of aerodynamics design to produce low-boom sonic effects. In 1983 Darden earned a Ph.D. in engineering from George Washington University. Darden left the computer pool in 1989 for a position as engineer, working on decreasing sonic boom in supersonic flight. That same year, Darden was appointed as leader of the Sonic Boom Team, a subsidiary of the High Speed Research (HSR) Program. On the Sonic Boom Team, she worked on designs to decrease the negative effects of sonic booms, such as noise pollution and depletion of the ozone layer. Her team tested new wing and nose designs for supersonic aircraft. She also designed a computer program to simulate sonic booms. Darden became known for her research as one of NASA’s preeminent experts on supersonic flight and sonic booms. Darden was promoted as a manager, and she advanced to become the first African-American woman at Langley to be promoted into the Senior Executive Service, the top rank in the federal civil service. In March 2007, Darden retired from NASA as director of the Office of Strategic Communication and Education. Darden served as technical consultant on numerous government and private projects, and she is the author of more than fifty publications in the field of high lift wing design in supersonic flow, flap design, sonic boom prediction, and sonic boom minimization. In 1985, she received the Dr. A. T. Weathers Technical Achievement Award from the National Technical Association. She was awarded the Senior Executive Career Development Fellowship from Simmons College in 1994. She received three Certificates of Outstanding Performance from Langley Research Center: in 1989, 1991, and 1992. On January 28, 2018, Darden received the Presidential Citizenship Award at Hampton University. In 2019, Darden was awarded the Congressional Gold Medal.