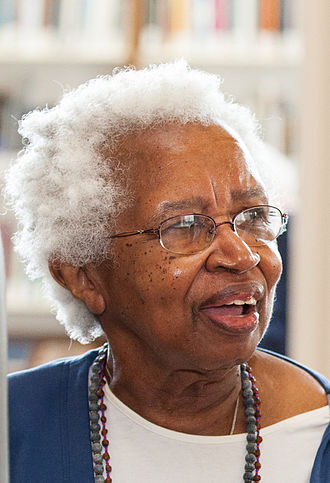 Jeannette Elizabeth Brown is a retired American organic medicinal chemist, historian, and author. She was born in the Bronx, New York, on May 13, 1934.  According to Brown, when she was young, she contracted tuberculosis, and was treated by Arthur Logan. Logan was a young African American in his intern year of residency and lived in Brown's building. Brown's later inspiration to study science came from asking Logan how one could become a doctor. He replied, “Oh, you study science.” Brown excelled in chemistry, scoring 98 out of 100 on the New York State Regents chemistry exam. She attended New Dorp High School on Staten Island, and graduated in 1952. Brown earned her bachelor's degree in chemistry at Hunter College in 1956, she was one of two African Americans in the inaugural class of Hunter's chemistry program. In 1958, she became the first African American woman to achieve a master's degree from the University of Minnesota in organic chemistry. After receiving her master's degree, Brown began work as a research chemist at CIBA Pharmaceutical Company, where she was involved in research programs for drug development targeting tuberculosis and coccidiosis, which afflicts chickens. She moved to Merck in 1969, where she co-authored 15 publications, obtained one patent, and contributed to five others. Brown's work focused on synthesizing novel medicinal compounds. She worked to develop the compound cilastatin sodium. This combination creates the antibiotic Primaxin, which is used to treat severe internal infections, as well as diseases caused by flesh-eating bacteria and some types of pneumonia. In order to succeed in industry, she believed that one needed to be an effective communicator, be able to work on a team, and have a strong scientific education in an ever-changing field. In 1986, she was appointed chairperson of the Project SEED Committee for the American Chemical Society. Brown spent 36 years in research before she switched over to education. From 1993 to 2002 she was a visiting professor at the New Jersey Institute of Technology, where she also helped recruit black students to enter STEM fields and worked on science education issues in the state. It was here that she also tutored middle school and high school chemistry teachers. She also won a grant from the Camille and Henry Dreyfus Foundation which she put towards tutoring chemistry teachers. Brown has also devoted significant professional effort to diversity and outreach projects; she served on the National Science Foundation Committee on Equal Opportunities for Women Minorities and Persons with Disabilities and was the historian of the American Chemical Society’s Women Chemist Committee. To this day, Brown continues to mentor both middle and high school students through the Freddie and Ada Brown Award. She founded this award in 2010 in honor of her parents. In 2008, Brown contributed seven biographies of African American chemists for the African American National Biography, including those of Dr. Marie Daly and Dr. Jennie Patrick, the first African American women to receive their Ph.D. degrees in chemistry and chemical engineering, respectively. She went on to publish her own book in 2011 entitled, African American Women Chemists. Brown has received recognition including outstanding alumni awards from both Hunter College and the University of Minnesota. Throughout her career, she has been involved in countless professional societies including the National Organization for the Professional Advancement of Black Chemists and Chemical Engineers.  In 2007, Brown was an Association of Women in Science fellow.  She also earned recognition as an American Chemical Society fellow and a Chemical Heritage Foundation Ullyott Scholar.