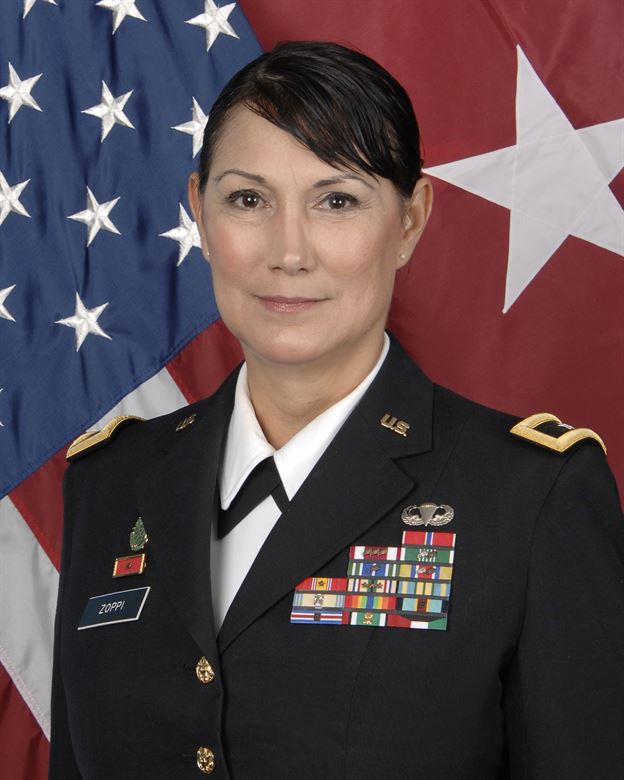 Irene M. Zoppi is a United States Army Reserve officer and is the first Puerto Rican woman to reach the rank of Brigadier General in the United States Armed Forces. She was born and raised in the town of Canóvanas, Puerto Rico. Her parents were members of the United States military stationed at the Roosevelt Roads Naval Station in Ceiba, Puerto Rico. As a child, she use to wonder around the naval station admiring the uniforms and the discipline around her. It was while she was visiting the Roosevelt Roads Naval Station that she met her future husband, Thomas Zoppi, a member of the United States Marine Corps stationed there. According to Zoppi, one night the two were talking about their plans for the future, and he said he would like to go into law enforcement and she told him she wanted to attend the University of Puerto Rico, join the Reserve Officers' Training Corps (ROTC) program there, and become a general. After she graduated from high school, Zoppi attended the University of Puerto Rico, joined the University's ROTC program and began her military career in 1985. Zoppi began as a private first class and was assigned with the Military Police Corps at Fort McClellan in Alabama. During her training, she excelled in the physical fitness activities and obstacle courses and her ROTC instructor nicknamed her “Ramba”, a reference to the movie character Rambo. The nickname stuck with her since that event in 1987. In 1988, she commissioned as a Second Lieutenant after graduating from the University of Puerto Rico with a Bachelor of Arts degree in Modern Languages. Zoppi was first sent overseas to Germany before being deployed to the Middle East during Operation Desert Storm. She served with the 3rd Armored Division-Spearhead as a special security officer and worked with the telecommunication centers. Among her duties as a special security officer was obtaining classified information from the internet, interpreting the information, labeling it, and making it available to her superiors. She was stationed in the area known as "The Valley of Death" where oil fields were burning constantly. Zoppi was present during the Liberation of Kuwait and was awarded the Bronze Star Medal for her actions in the conflict. She also served in Iraq and Saudi Arabia during her deployment. Zoppi retired from active military duty in 1995, with the rank of Captain. However, she continued to serve in the military through the Army Reserves and reached the rank of Colonel. Being in the reserves permitted her to continue her military career while at the same time living a full civilian life. She also continued her education and, in 1998, graduated from the Combined Arms Staff Service Course. She earned a master’s degree in Business Administration from John Hopkins University in 2000. In 2004, she graduated from the Command & General Staff Officer Course. That same year she earned her Ph.D. in Education Policy, Planning, and Administration from the University of Maryland. In 2012 she received a Master of Strategic Studies degree from the Army War College. In 2017, Zoppi was promoted to the rank of Brigadier General. Her promotion came with a new appointment as deputy commanding general for the 200th Military Police Command at Fort Meade in Maryland, the largest military police organization in the Department of Defense.