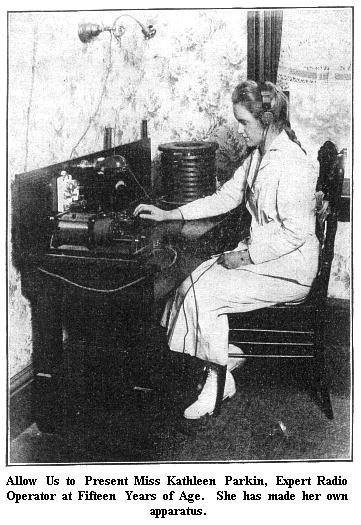 Gladys Kathleen Parkin Was born September 27, 1901 in Bolinas, California at a flagstaff hotel that was owned by her parents John Parkin and Hannah Marie Bennett Parkin. While only fifteen on April 13, 1916 she attended high school at Dominican College where she obtained her first class commercial radio operators license. Parkin became the youngest successful female applicant for a radio license ever examined by the government at that time. Prior to receiving the license she held an amateur radio license for six years before she applied for the government license on a whim, to see if she could pass or not and she did. Parkin became the third woman to receive this license and the first to do it in California. She continued her career working with her brothers, John and Richard, in the family radio business, Parkin Manufacturing Company. Parkin passed away on August 3, 1990 at the age of 88 in Marin County, California but she left behind a great legacy and paved the way for future women in radio. Source: https://upload.wikimedia.org/wikipedia/en/thumb/c/c5/Gladys_kathleen_parkin.jpg/82px-Gladys_kathleen_parkin.jpg