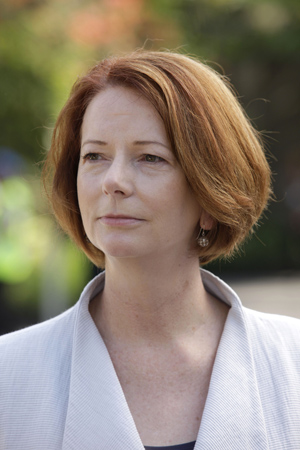 Julia Eileen Gillard was born on September 29th, 1961. She was born in Barry, Vale of Glamorgan, Wales. Julia suffered from bronchopneumonia as a child. To aid her recovery, her family decided to move to Australia, which had a much warmer climate. Julia graduated from the University of Melbourne with a Bachelor of Laws degree in 1986 and a Bachelor of Arts degree in 1989. In 1987, Julia joined the law firm Slater & Gordon. She worked in industrial law and was admitted as a partner of the firm in 1990. She was both the youngest person and the first woman to hold this position. From 1985 to 1989 she served as the president of the Carlton branch of the Labor party. She resigned from her role on Slater & Gordon to pursue a life in politics. In 1998, Julia was a member of the Australian Parliament. She was then sworn in as the Deputy Prime Minister in 2007. She was also the Minister of Education. As the Minister of Education, Julia launched the “Digital Education Revolution” (DER) program. This program would provide more modern digital materials to students. Julia Gillard was sworn in as Australia’s 27th Prime Minister in 2010. She was the first female Prime Minister, the first unmarried Prime Minister and the first Prime Minister since Billy Hughes to have been born abroad.