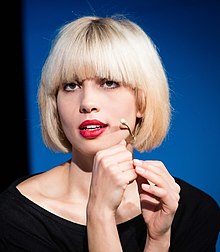 Nadya Tolokno is a Russian conceptual artist and political activist. She was a member of the Anarchist Feminist group Pussy Riot, and has a history of political activism with the controversial street art group Voina. On 17 August 2012, she was convicted of "hooliganism motivated by religious hatred" after a performance in Moscow Cathedral of Christ the Saviour and sentenced to two years' imprisonment. On 23 December 2013, she was released early with another Pussy Riot member Maria Alyokhina under a newly passed amnesty bill dedicated to the 20th anniversary of the Russian constitution.