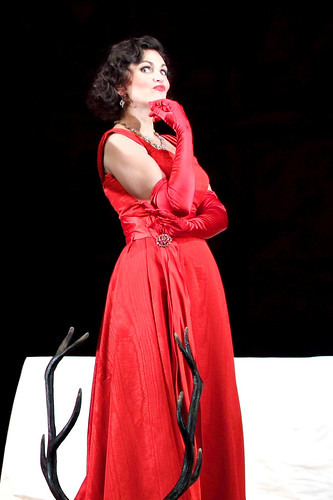 Spanish soprano and #METOO activist Ainhoa Arteta made her Royal Opera debut in 2002 as Musetta (La bohème) and has since sung Alice Ford (Falstaff) for the Company. Arteta was born in Tolosa. She first came to fame in 1993, when she won prizes in both the Metropolitan Opera National Council Auditions and Operalia. Operatic engagements include Mimì (La bohème) for the Metropolitan Opera, New York, and in Mexico and Seville, Marguerite (Faust) for the Bavarian State Opera, the title role in Manon Lescaut in Seville, Amelia Grimaldi (Simon Boccanegra), Tatyana (Eugene Onegin) and Adriana Lecouvreur in Bilbao, Musetta and Micaëla (Carmen) for Liceu, Barcelona, Giulietta (Les Contes d’Hoffmann) and Donna Elvira (Don Giovanni) for the Teatro Real, Madrid, Roxane (Cyrano de Bergerac) and Alice Ford in San Francisco, the title role of La Wally in Geneva, Elisabetta (Don Carlo) in Oviedo, Tosca in Bologna and Tosca and Tatyana in São Paulo. Arteta’s concert appearances include Verdi’s Requiem in Tokyo, recitals throughout Spain and gala performances around the world with Plácido Domingo. Her many awards include ‘Best Classical Artist’ at the Fifth Spanish Music Awards.