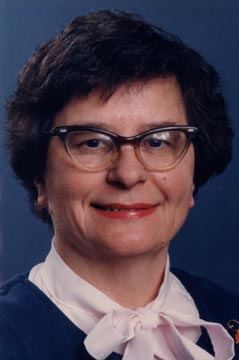 Stanalene Anderson was the first woman City Editor in the history of the male-dominated Topeka (KS) Capital-Journal newspaper. When she began working at the newspaper, she was given the "woman's" job as Society Editor, but she wanted so much more than that. She began to make friends at the Topeka Police Department, and became a trusted ally to them. She was able to obtain stories that no one else could, as a result of her contacts. Eventually, she became the Mental Health Reporter, developing close ties with Dr. Karl Menninger, who was one of the founders of the then-famous Menninger Psychiatric Clinic. She was unstoppable, winning many awards for her writing. After her retirement, she continued to coach new and future journalists, working with the University of Kansas School of Journalism & Mass Communications (the "J School"). When she died in 2000, a scholarship was established at the J School in her name. As my mom, she inspired me to be compassionate and caring to all people and to never give up, even when the the odds are stacked against me.