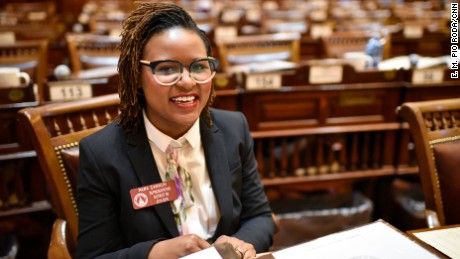 Park Cannon is one of the five openly LGBTQ+ members of the Georgia House of Representatives and the youngest. When Simone Bell, former Representative of Georgia's District 58 and first African-American lesbian to serve openly in the U.S. state legislature resigned from the Georgia House she personally called Cannon and asked her to run. Heeding that call, Rep Cannon has won two elections and is on her way to win a third and hopefully will be running in Georgia's general election in November. Cannon openly identifies herself as queer and made the decision because it's an inclusive descriptor and she has decided to reclaim it. Cannons was sworn in February 22 after winning a runoff vote for the District 58 seat. She is hoping she can properly represent a mixed group of voices who feel underrepresented. She had had experience in working with social justice nonprofits and women's health clinics and has advocated for women's reproductive rights and access to public education. She majored in Linguistics and has a minor in women's and gender studies from the University of North Carolina.